Choline is a vitamin supplement that is present in several forms, including phosphatidylcholine (PC).  The medicinal effects of choline are presumed to be caused by phosphatidylcholine. PC is a major part of the membranes surrounding our cells. When PC is eaten, it is broken down into choline rather than being carried directly to the cell membranes. Choline acts like another commonly used supplement, SAMe (S-adenosylmethionine), to provide the methyl groups used by the body in a number of chemical reactions, including the detoxification pathways of the liver. It is also used to make acetylcholine and dopamine, nerve chemicals essential for normal brain function. Choline may also aid in brain and liver function by assisting with the absorption of carnitine from the digestive tract. Carnitine is essential for mitochondrial function, ensuring the liver and brain have an adequate supply of energy.

Why recommend administration of choline to my pet? 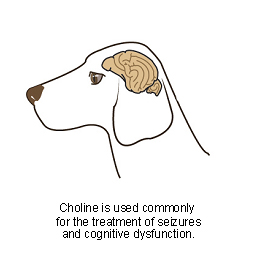 Choline is indicated as part of the therapy for dogs and cats with seizures (epilepsy). Choline appears to be effective in treating small animal cognitive disorders (cognitive dysfunction, "doggy and kitty Alzheimer's").

"...it may prevent clinical signs of cognitive disorder."

Although research studies suggest it is only moderately effective, clinical experience suggests that when used in older pets, it may actually prevent clinical signs of cognitive disorder. Choline may help some pets with urinary incontinence, especially if the incontinence is part of the cognitive disorder syndrome.

How much experience is there with the use of choline in pets?

What species of animals are being treated regularly with choline?

Dogs and cats are treated with choline.

How much research has been conducted on this supplement?

Choline is one of the better researched supplements for the treatment of disease in dogs and cats. As mentioned, it has been shown effective in recent studies.

How can my pet benefit from choline?

How safe is choline?

"Rare side effects include agitation and hyperactivity."

Rare side effects include agitation and hyperactivity. These signs usually disappear when choline supplementation is stopped and then restarted at a lower dose.

Where do I obtain choline and do I need a prescription?

Pet owners are cautioned against buying supplements without knowledge of the manufacturer, as supplements are not highly regulated and some supplements may not contain the labelled amount of ingredients. Your veterinarian may have preferred supplements that he or she will recommend. A prescription is not needed for choline supplements.

© Copyright 2009 Lifelearn Inc. Used and/or modified with permission under license.